Turkers are asked to provide training pairs $(x,y)$ where $x$ is a natural language command and $y$ is a action sequence in the game world of “Mastering the Dungeon”. The set of $y$ is rather restricted and turkers are encouraged to use flexible vocabulary in giving the command $x$.

This paper purposes a new way of collecting training data from turkers by encouraging competition across turkers in the short run and collaborating to train a model in the long run.

This mechanism incentizes turkers to provide examples that are not too easy nor too hard: both too easy or too hard examples will not improve the turkers score compared to others. In a sense, the turkers are creating a curriculum for the model of harder and harder examples.

The world state is represented by a graph where each concept, object, location and actor is a node and the edges represent relations between them. “Relation” here is used in a quite general sense, covering positional relations and properties. 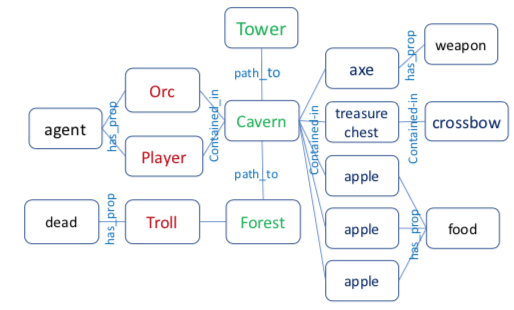 Each action has a set of prerequisites and applies a transformation on the graph.

Since the language grounding task is essentially finding a mapping between two sequences, a natural baseline is the seq2seq model with attention. On the encoder side, our input is natural language, which fits the seq2seq model well, but on the decoder side, our output is a structured action sequence. This bring restrictions to our decoding process and also inductive biases that should be included into the model design.

In the AC-seq2seq model, a separate hidden state $s_{a,j}$ is maintained for each candidate action at each time step (the standard seq2seq model only has $s_j$.) This is like having $|A|$ GRUs working simutaneously on the decoder side, but all GRUs share parameters. Hidden states are updated by \(s_{a,j} = GRU([a; attn_{a,j}, env_{a,j}], s_{a,j-1})\)

Ablations for Mechanical Turk Descent include removing the time constraint for a fix number of training examples, removing feedback from the model and removing the competition altogether.

Many companies and researchers rely on crowdworkers to provide labeled data for training complex machine learning models. Instead of developing methods to rate the quality of crowdsourced labels and remove noisy labels, we can incentize crowdworkers to provide higher quality labels by gamification. (The authors put their data collection task in the context of playing a text adventure game where each worker gets to train their own dragon.) Although the paper works on the text grounding task, the data collection gamification idea can be applied to a wide spectrum of tasks.

This is a part of the DMG reading group series. Stay tuned for updates:)